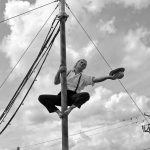 In the north of France, when I was a child, we used to go to the Ducasse (term designating the funfair with its booths, stands and rides) and we came back with a toothache having eaten cotton candy, nougats or large steaming waffles. Sometimes in rifle shooting, we would pop enough small balloons to hit the jackpot: a stuffed doggie or a little monkey.

In the old days, to win the jackpot, you had to climb barefoot and barehanded to the top of a mast coated with tallow or grease to reach the ring from which gifts were hung. In Europe it was food, in Haiti it was clothes, in Indonesia it was bicycles that you could go and get !

For the record, the Pays de Cocagne is, in the imagination of some European cultures, a sort of earthly paradise, a miraculous land whose nature overflows with generosity for its inhabitants and guests. No wonder that access to it was limited, during traditional festivals, by brushing the mast with grease !

A red cedar pole (an old transformed Hydro Quebec pole), another of white cedar (which we chose in the forest), both 20’ high and held in the air by 3 to 4 guy-wires (anchored to the ground on stakes, concrete blocks, trees) actually offer us 2 attractions!

The first is that of the Cockaigne Pole, which the public is invited to climb to ring the bell at the top of the pole. The second is that of the Giant Steps, also called The Flying Course. The audience grasps one of the 4 handles, hooked on the end of a rope suspended from a rotating ring, then walks, runs and flies. This last game was, a long time ago, a gymnastic apparatus known under the name of Vindas (we still find a few in playgrounds in Quebec).

Safety and Use: Summer and Winter

The Cockaigne Pole is more suitable for summer use, as the public is hung on a safety harness and followed by one of our artists, whereas the Giant Steps is a 4-season attraction. For user safety, the landing surface on the ground must be soft (grass, sand, mulch, snow, straw). A security perimeter is created around the structure (flags, barriers, straw bales).

Very often, we organize climbing competitions to the top of the Cockaigne Pole, accompanied by the mechanical music of the barrel organ and the encouragement of the public.

Duration:
2 to 4 hours of continuous animation