Traditional Atmosphere at The Winter’s Delight!

To enhance your ambiance of The Winter’s Delights Le Moulin à vent Productions has joined forces with passionate musicians and singers whose roots are in Quebec traditions.

In addition to sharing their contagious smiles and their musical talents, they invite the public to join them for a unique musical experience. Enter the orchestra! 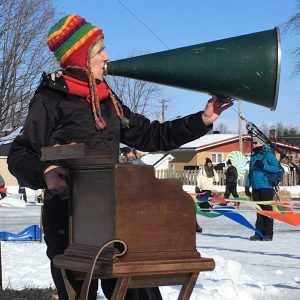 A specialist in contemporary songs from the past century, Claire Lafrenière is one of the few crank turners in Québec. If it’s not that of her gramophone (to play her 78’s), it is that of her barrel organs that she will make you spin. And if you don’t know the song, she’ll put a notebook in your hands with the lyrics. Be careful, you also risk making the Gigueux de bois (the Jig of Wood) dance with it! A tradition of logging camps. 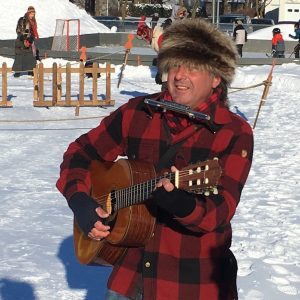 A seasoned entertainer and exceptional performer, André Thériault has presented numerous shows in Québec, New Brunswick, Nunavut and Newfoundland, Ontario and Western Canada. He offers the audience an authentic and daring interactive performance. In an always very festive atmosphere, he never ceases to improvise with his instruments (guitar and voice). He becomes an accomplice with the public and makes them rediscover a vast repertoire of songs from home. de chez nous. 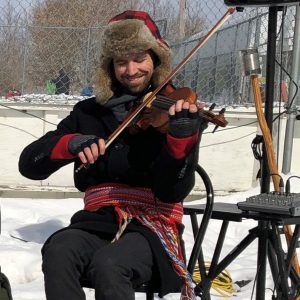 Tim S. Savard is a talented multi-instrumentalist, composer and versatile musical arranger in styles ranging from jazz, to pop, to traditional (Quebec and Celtic music) and even classical. He joined Le Moulin à vent Productions team last winter with his violin and feet. Podorythmie to accompany and train the audience to keep the pace! The jig and reel follow one another at a crazy pace. The public can play the wooden spoons, the Ugly Stick (of Newfoundland origin) and the little Gigueux with them.

Have a project ? Call us!